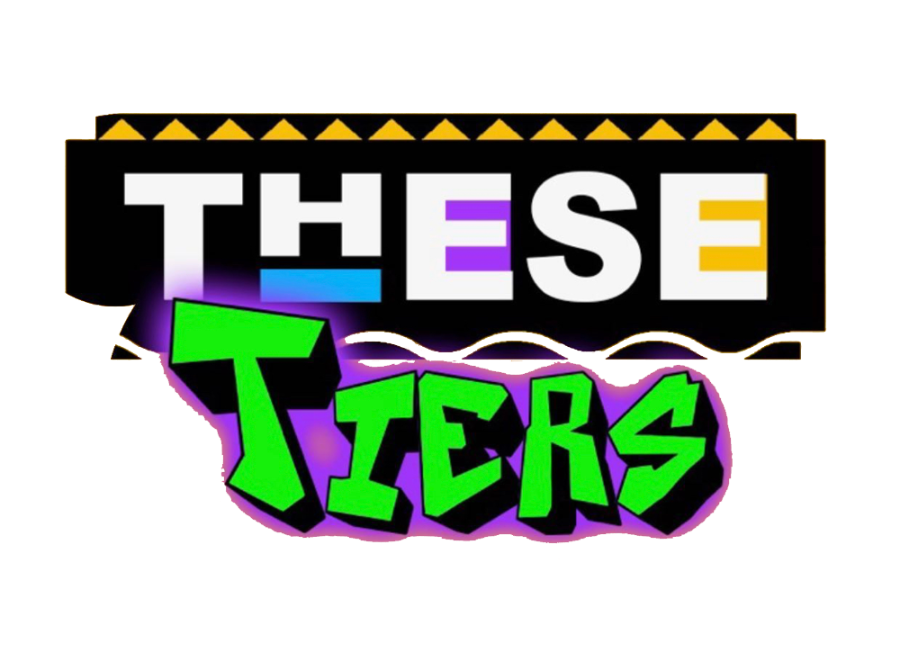 Earlier this Summer, we saw a ranking of Black sitcoms that had gone viral. And it was horrible. We decided to hop on IG Live along with whomever of our friends wanted to join and argue about what the ranking should really look like, and when we hashed that out we realized there was more to discuss. #TheseTiers was born. Join Jamal & Naima every Friday for a discussion and ranking (with our very lively and impassioned Tiers Fam) of classic entertainment: Shows, Theme Songs, Characters... if it's worth arguing about, we're gonna get to it eventually. Join us on IG live Fridays at 7pm ET/ 4pm PT.

This one was tough: alot of regional faves, and alot of necessary distinguishing between flavors and brands. In the end, we made a couple of calls: Mad your joints are missing? You can look at the full list of submissions here. 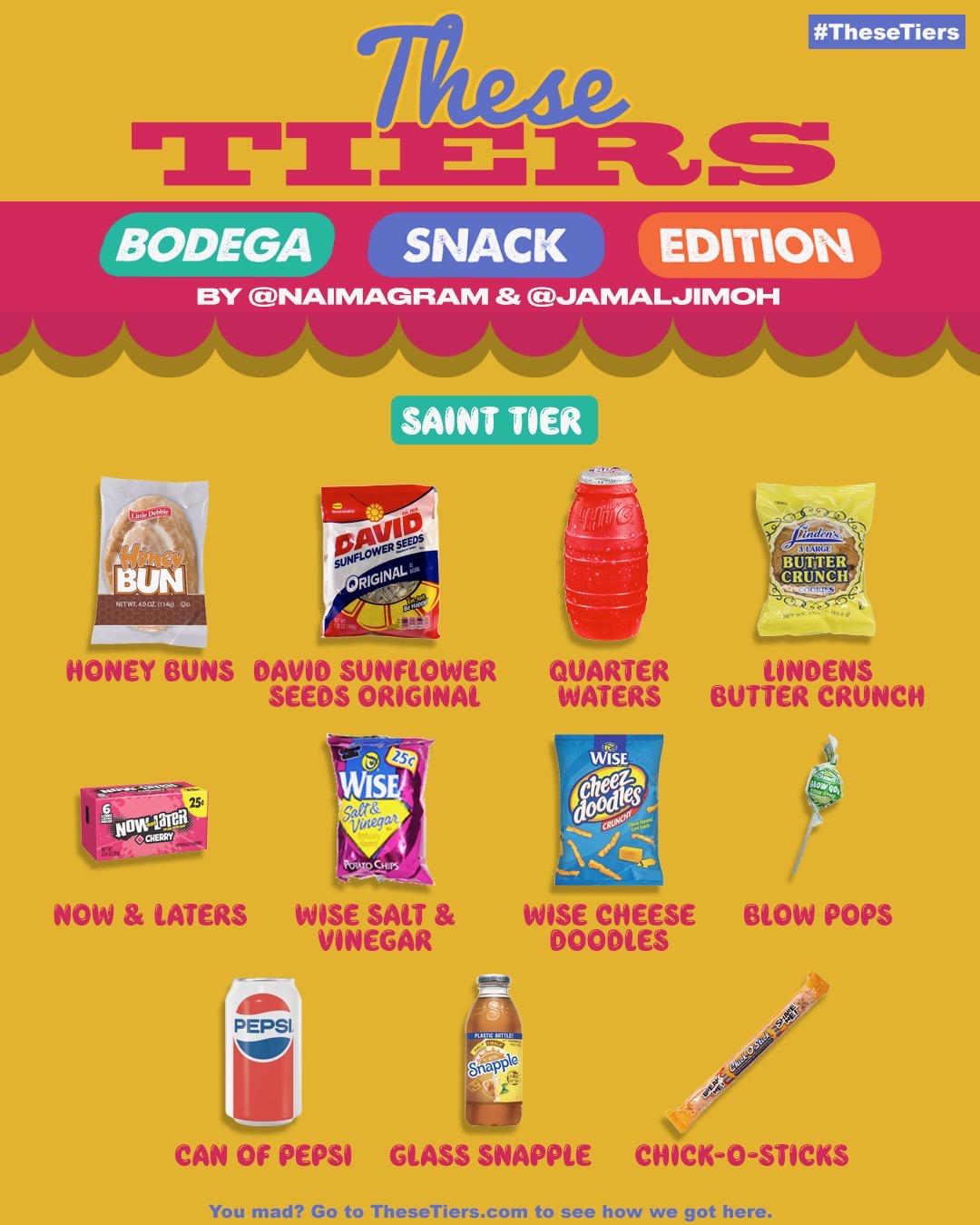 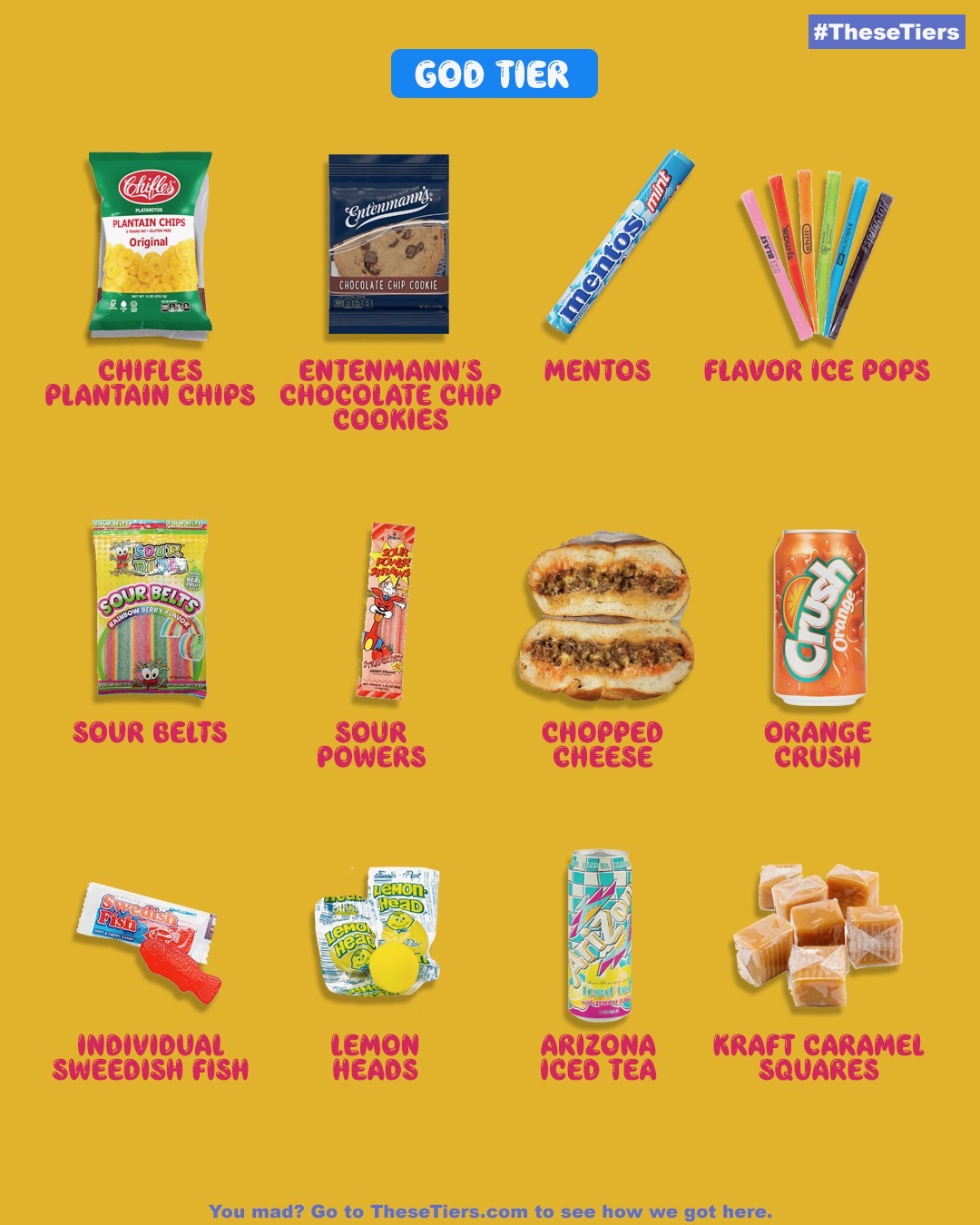 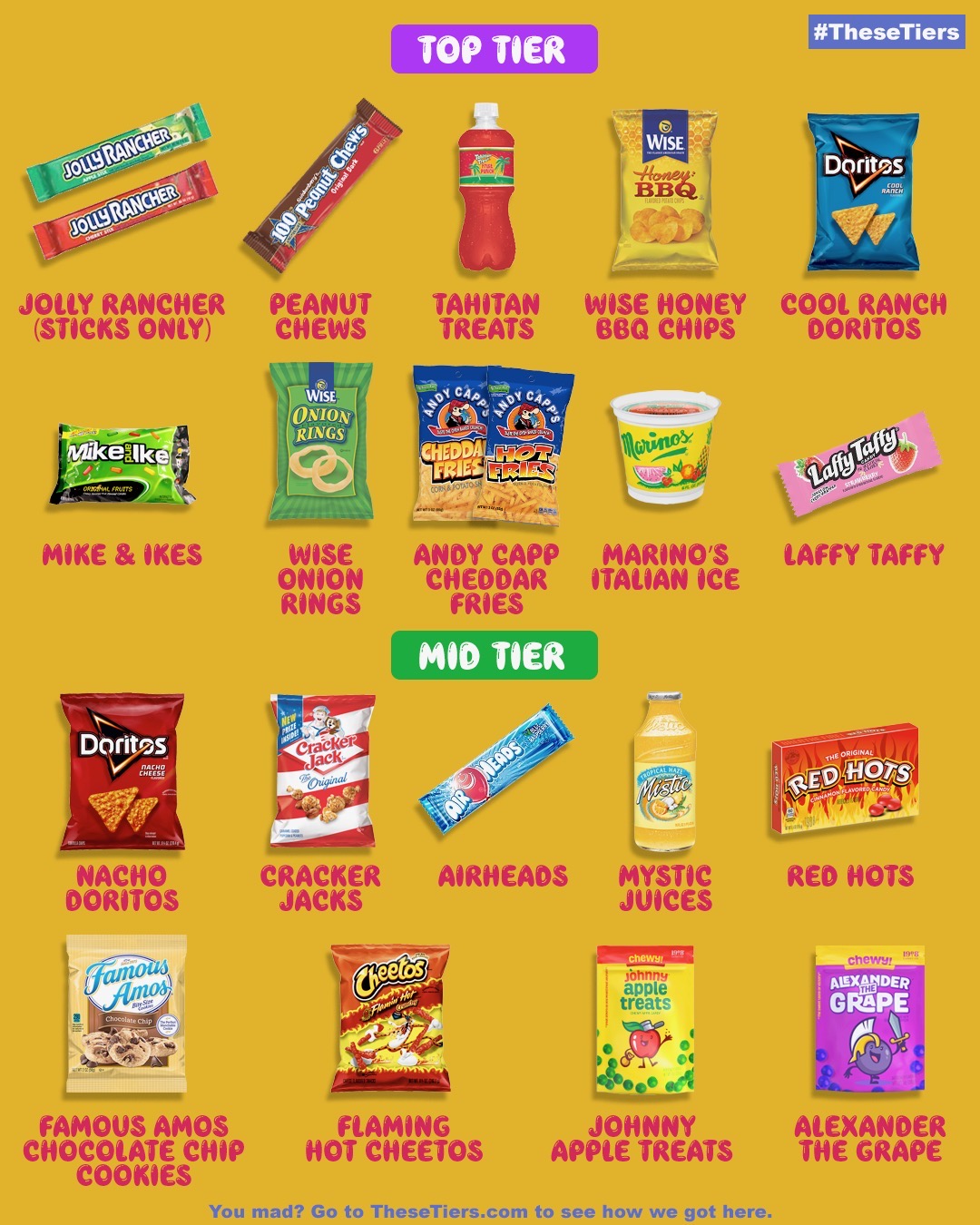 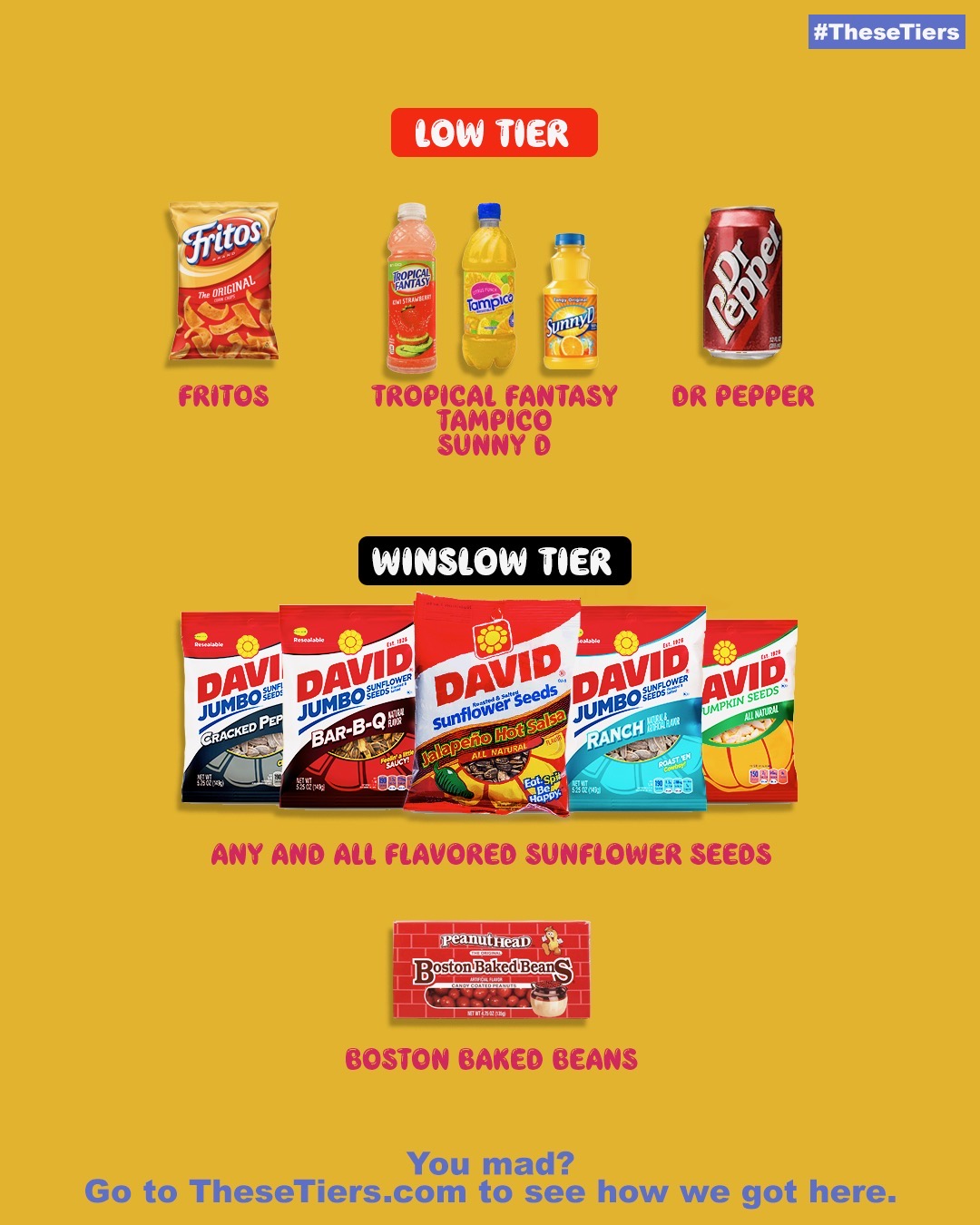 We learned alot about ourselves with the cereal rankings - and for the first time could only come to a consensus about one placement. Even Naima and Jamal were at odds! Clips & final rankings below,  watch the FULL EPISODE

Jamal had quite a few hills he was ready to die on, but this one might have been the most surprising.

CLIP: CAP'N CRUNCH WAS NOT AN ABOLITIONIST

We had to address the consistently low rankings of the chocolate cereals.

CLIP: THE WHAT, NOW?

A few folks had suggestions for the cereal ranking that led us to google. 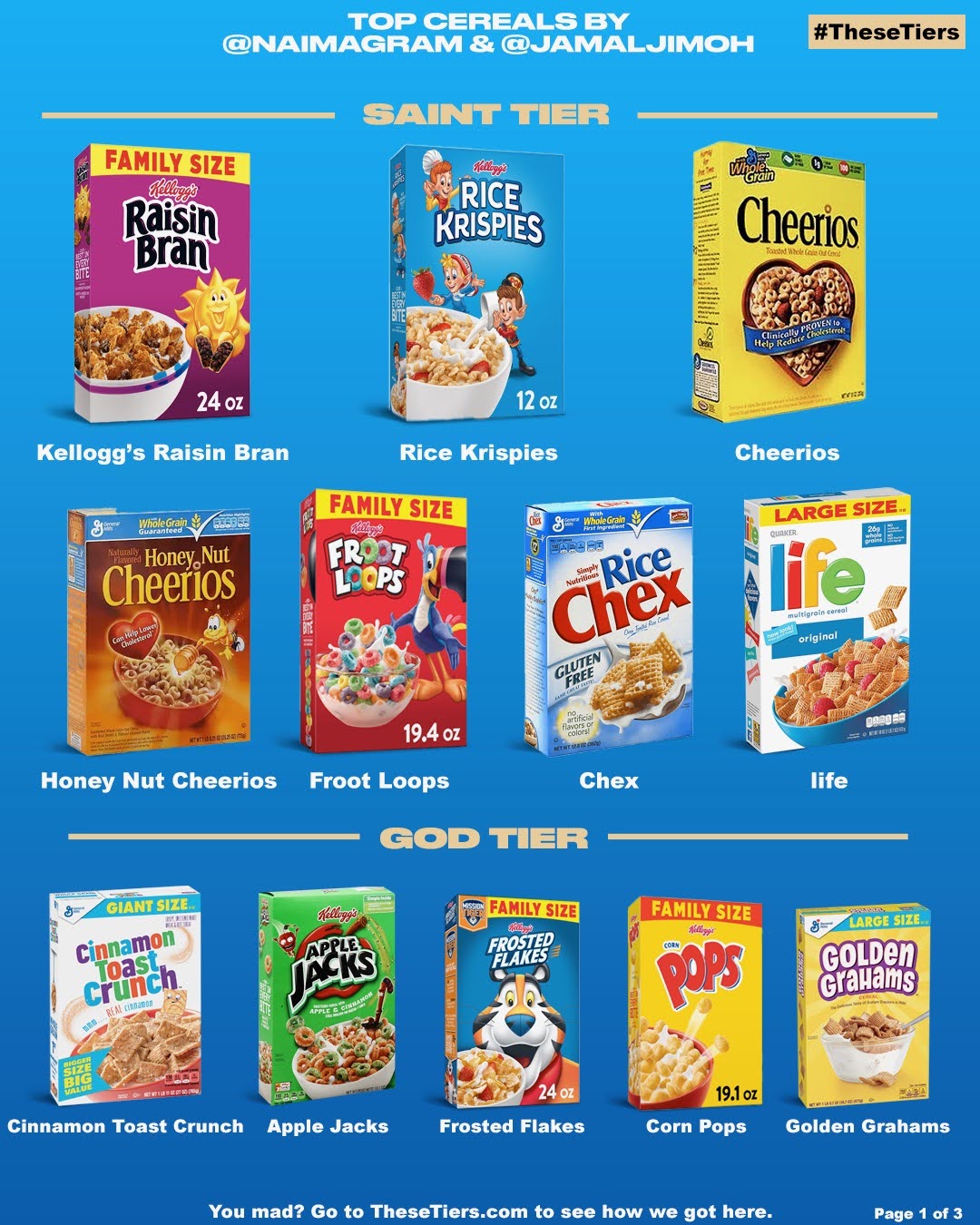 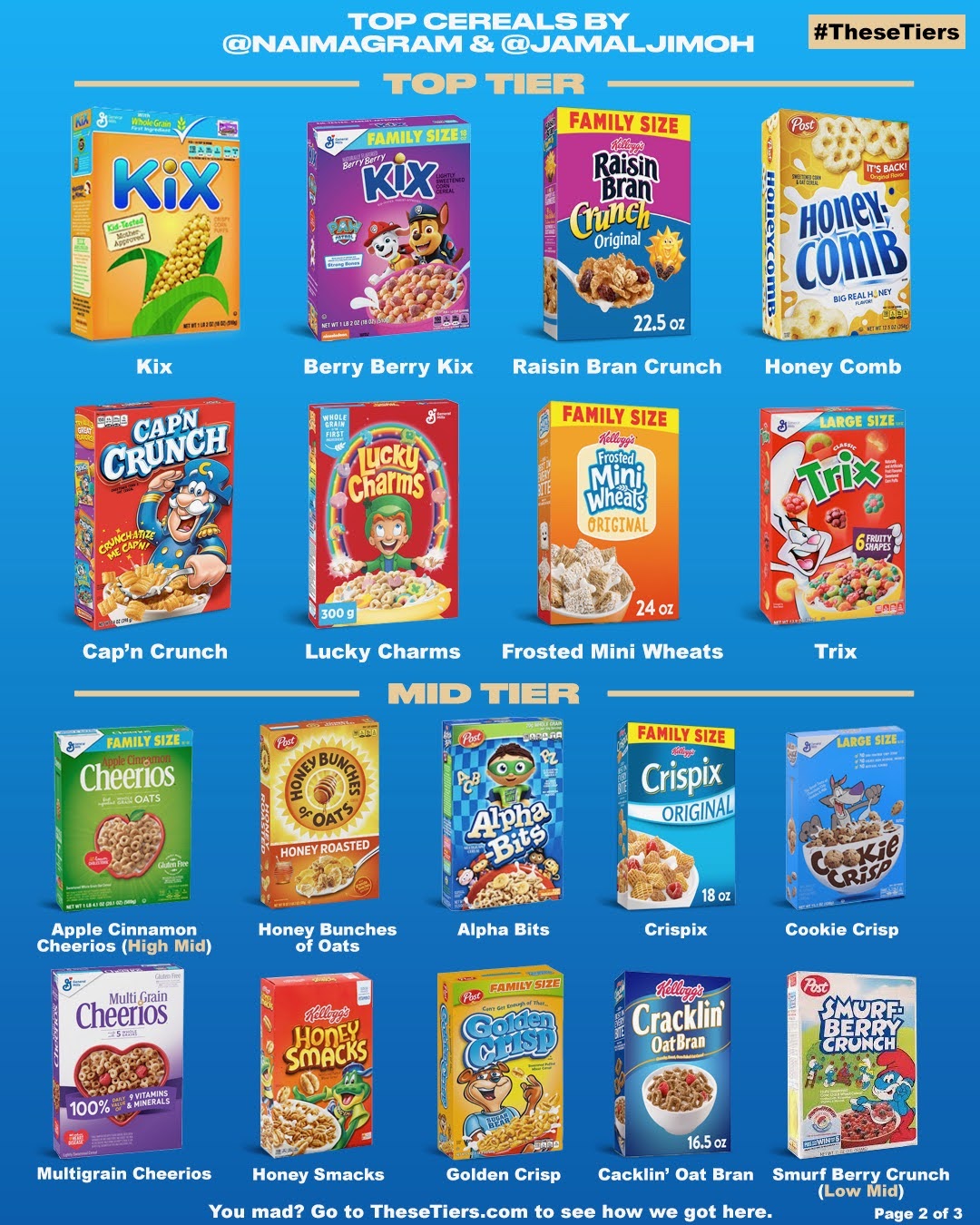 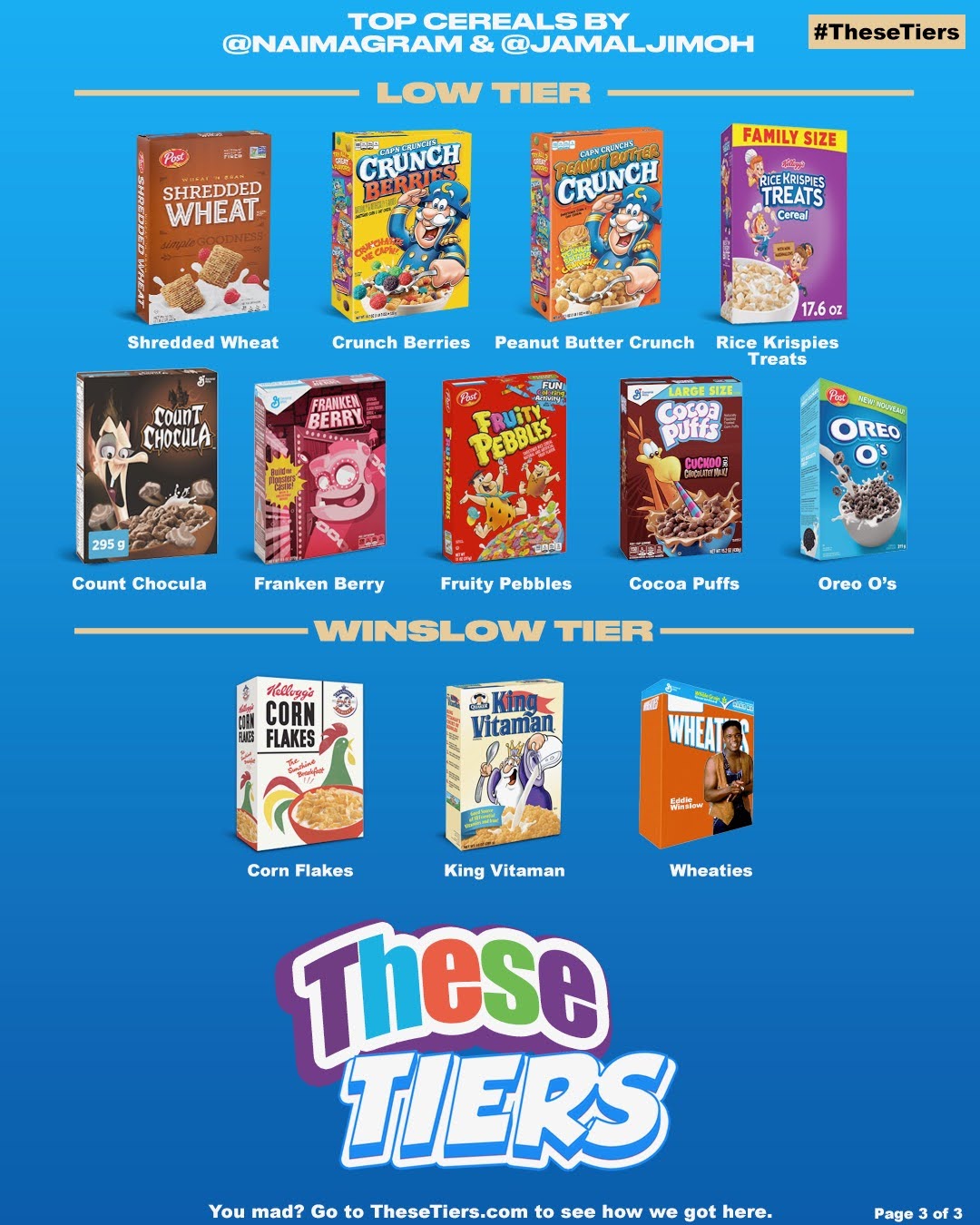 Keep up with the rankings in real time! Download the blank #TheseTiers ranking chart and work along with us as we go through the rounds.
DOWNLOAD RANKING GRID

It was another marathon session (and who knew y'all cared so much about Fran damn Fine?) but we got to a final ranking based on the below. Also, for the first time ever we're publishing the SAINT TIER (Because Claire Olivia Hanks Huxtable, Esq deserves) and the WINSLOW TIER just so everybody knows what it is.
Once again, we're prompted to discuss (rant about) the Winslows.  Full episode coming soon.

1. Any sitcom, not just Black sitcoms 2. Let's stick to shows that were either still running and/or in syndication from 1980 on. 3. Cartoon allowances: Simpsons, The Proud Family, Family Guy, Cleveland Show, King of the Hill (if I missed an obvious one that we'd actually care about, then add it) 4. Aunts and mother figures count. And if you're adding Aunt Viv, designate which Aunt Viv. 5. No dramas 6. Please consider whether people really know this mom/character and don't just name a character that's a mom. (If that didn't make sense, read it again).  Wanna know who didn't make the cut at all or who got dropped? Take a look at the Full Original Sitcom Mom List 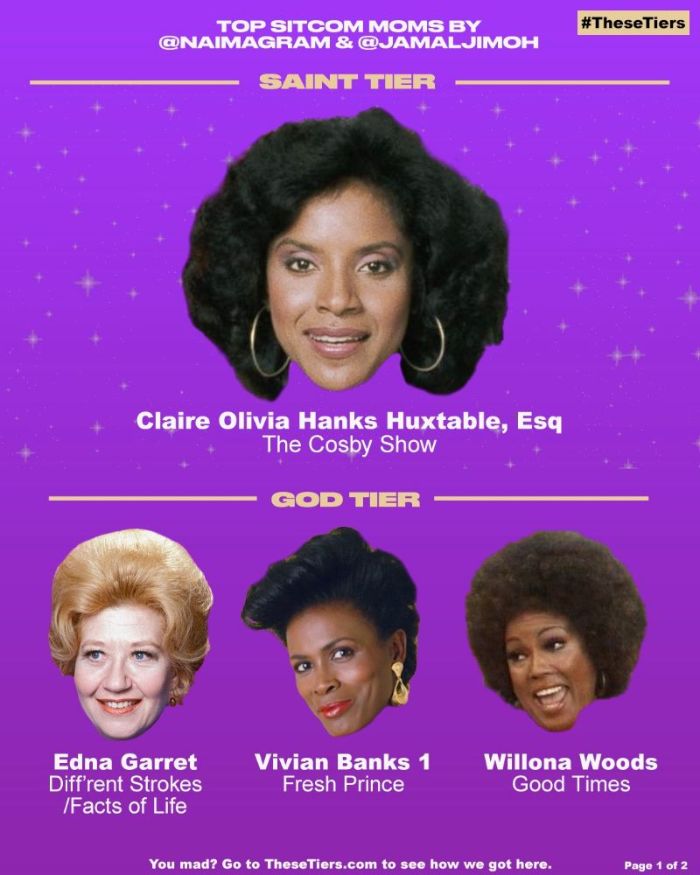 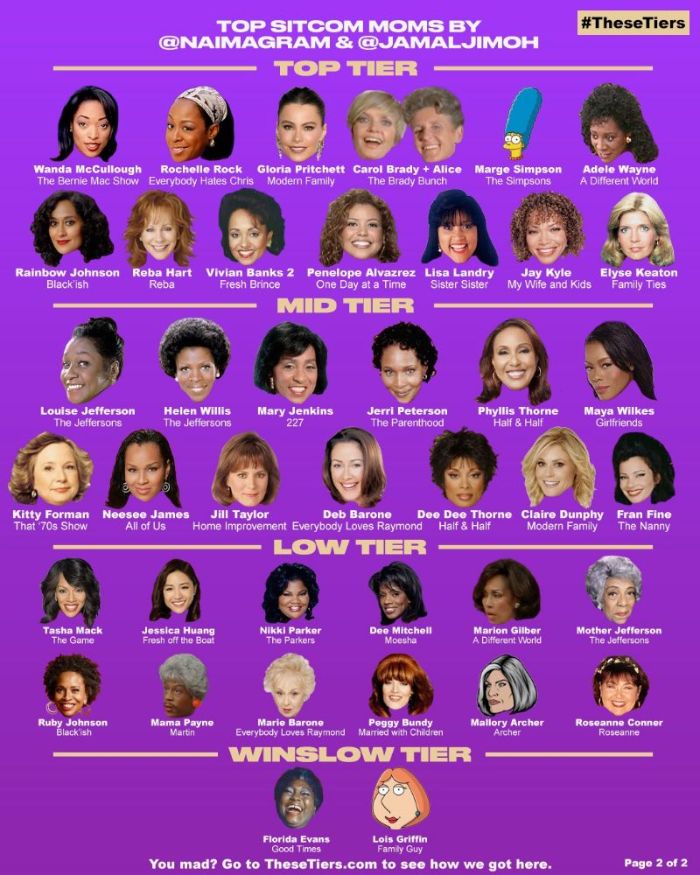 After almost FOUR HOURS!!! Also, we need to arrange group family counseling for some of y'all) UPDATE: The Dads ranking has gone wildly viral, so let's break down the ranking parameters for those coming to find answers: 1. We judged by the actual parenting we saw, not how iconic the dad was 2. "He had a job" is a not an argument for a great dad 3. Neither is "He was home" 4. We don't fck with Carl Winslow. That's a universal rule (he let his neighbor harass his teenage daughter and break sh*t all in his house for 9 seasons. And he also lost a whole child to the streets). 5. Yes, that should say Cam & Mitch (that was my bad, don't ask me how - Naima) 6. We know Mr. Gaines wasn't a dad. Father figures count.  7. Whoever you don't see here that you think should have been here was dropped altogether. 8. Read number 7 again. 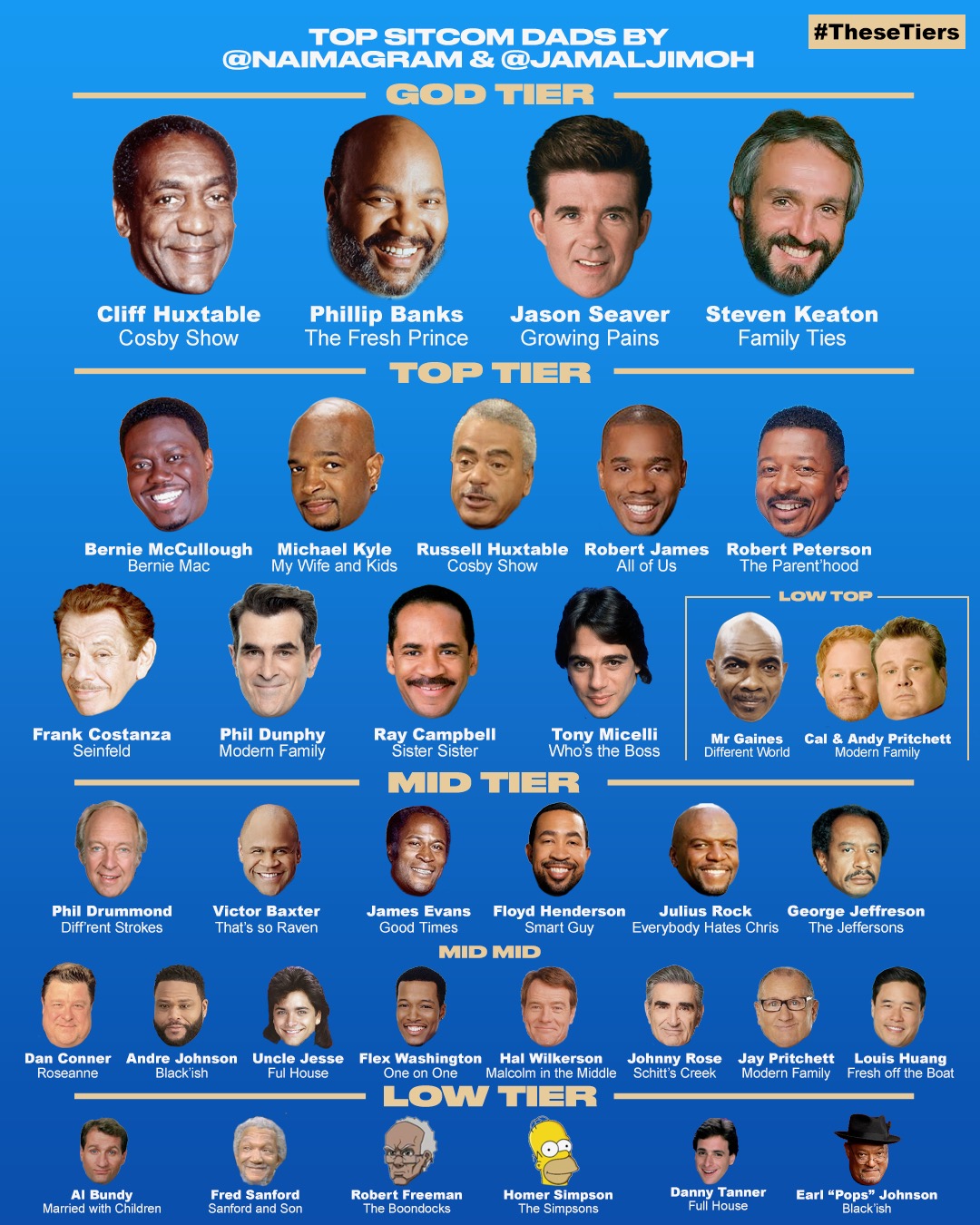 This was a MARATHON! Y'all were really not trying to let go of some of your childhood faves. Full episode coming soon.
CLIP: What is it with the "Gummi Bears" Theme?!?!

RECAP Watch Jamal, Naima and the fam debate over which theme songs didn't age well, which ones people are holding on to because of nostalgia, and tried to balance a slight bias against late '90s and '00s shows. Also Family Matters is still trash. WATCH THE FULL CLIP ON THE EPISODES PAGE
#TheseTiers Episode 2: Sitcom Theme Songs 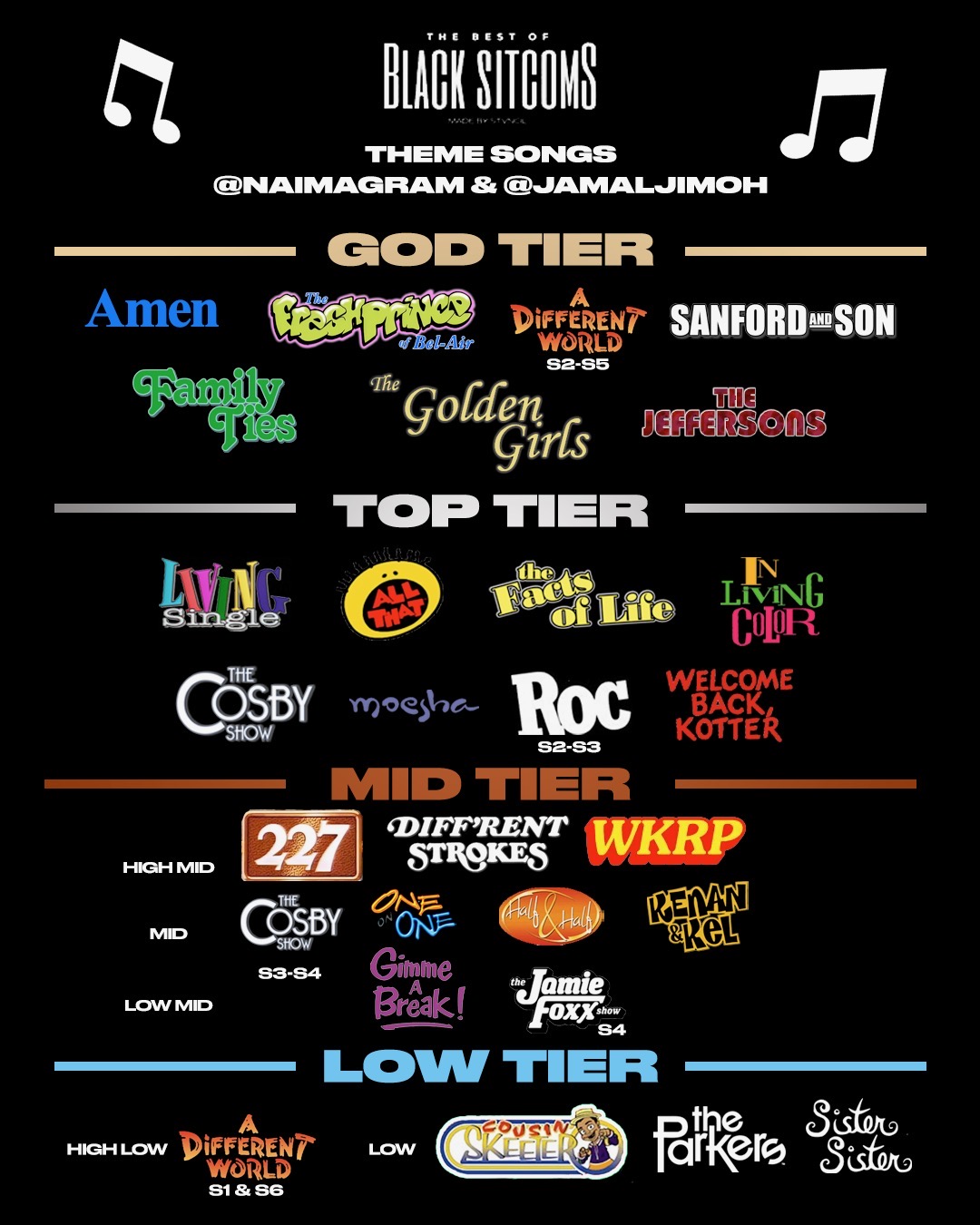 We decided to give cartoons their own convo. We know there are 3 sketch comedy shows here, we don't care. We instituted a cap on white sitcom additions (the intention was to center Black shows). We'll also give late '70s - mid-'80s sitcoms In general their own convo. Themes like Cheers and Mary Tyler Moore are too Iconic to even touch. Scottie Beam's choices were given extra weight due to her underrepresented demo + the #IStandWithScottie campaign. The Family Matters theme sounds like something Uncle Jesse wrote and It's terrible. We played EVERYTHING. Some things multiple times. 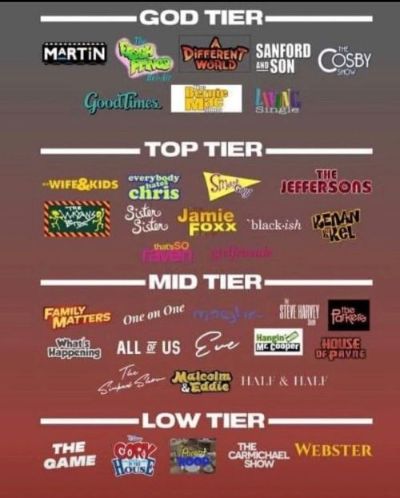 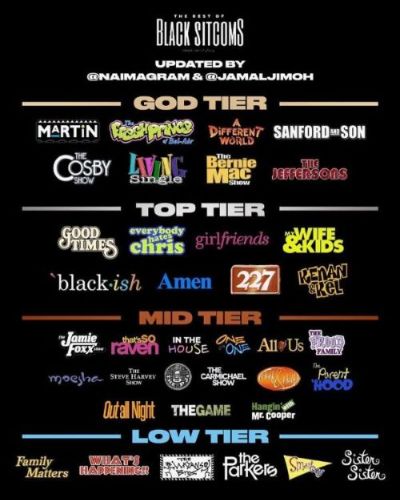 Have suggestions? Wanna get the debates started early? Hit us up!